The tiny piano sits silently in my mother’s living room, its yellowed keys beckoning to be played. Its journey began in her uncle’s small Boston apartment almost a century ago.

After Uncle Dougie passed away, the piano moved to her childhood home. She learned on this petite 66-key upright, entire octaves eliminated to accommodate smaller spaces.

The piano accompanied my mother through three husbands, five states, and a daughter who spent twenty-five years finding her way. It now lives in her old farmhouse.

She played hymns; I played Mozart. It appeared in the Mother’s Club float, hoisted aboard a truck bed for the annual Memorial Day parade. My mother played, wearing a top hat, while the Mother’s Club sang along.

The Mother’s Club disbanded; the husbands passed away. The piano remains. But my mother no longer remembers how to play. 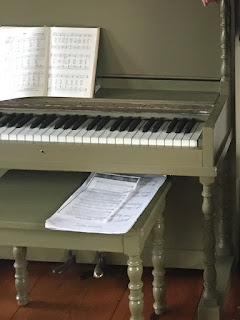