When I was seven, my family adopted a dog. Part Setter and Saint Bernard, he was huge. We named him Jack. He was the sibling I never had.

Jack passed away a decade later, helping my mother through a divorce and the unexpected departure of a daughter. She never had another dog. Until Louie.

She inherited Louie, an elderly beagle, when her husband moved to a nursing home. But as her dementia became more serious, she couldn’t keep up with Louie’s needs.

Instead of dropping him at a shelter, I contacted the only beagle rescue in the state and within three days, Louie was adopted by a young couple with a hundred-acre farm. His new people greeted him excitedly, along with his new sister, another beagle.

Letting go of Louie was heartbreaking, a bittersweet reminder of that sly thief, Alzheimer’s. 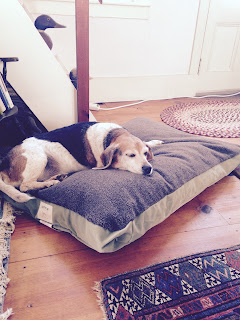