It’s a comment we caregivers hear often. One I’m as tired of hearing as I feel at Mile 22 of an actual marathon.

I’ve run for nearly two decades and, in that timespan, completed almost as many marathons. Early on, I discovered I was built for distance, not speed. Twelve weeks of physical training for a 26.2 mile footrace is tough enough, and crossing the finish line is the true measure of endurance.

Yet silencing the mental madness near the end of the marathon is the ultimate challenge, perfected over time and practice.

I haven’t run a marathon in three years, stepping instead into the role of my mother’s caregiver. I run this course head-on. My caregiving tank frequently runs on empty. I still run daily, in circles around the island not unlike the endless loop of dementia in which we both reside.

In running and caregiving, the race does not always go to the swiftest, but to those who shall endure. 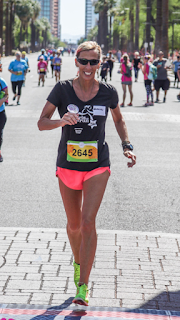